The phrase double knitting has a couple of meanings in the knitting world. Double Knitting or DK is a weight of wool and it is a knitting method.

But on this page I am using the other common meaning for the term which is a style of knitting that you can do on single pointed needles or a long loom. In this context, the term refers to creating a knitted fabric that has knit stitches (stocking stitch) on both sides of the fabric.

This knitting technique creates a 'tube' of knitting (double-sided fabric) with a single cast-on edge, with knit stitches on both sides.  You can knit your piece in two colours with only one colour showing on each side.  You can also fill your 'tube' with stuffing (or beans or any other suitable fill) by temporarily opening up the top of your work before you cast off.

One of the projects that I have used double knitting for is this lovely Waldorf Doll pattern that I purchased on Etsy.  (Hint: you will find a great variety of knitting patterns for toys and all sorts of other bits and pieces on Etsy - well worth a visit!) 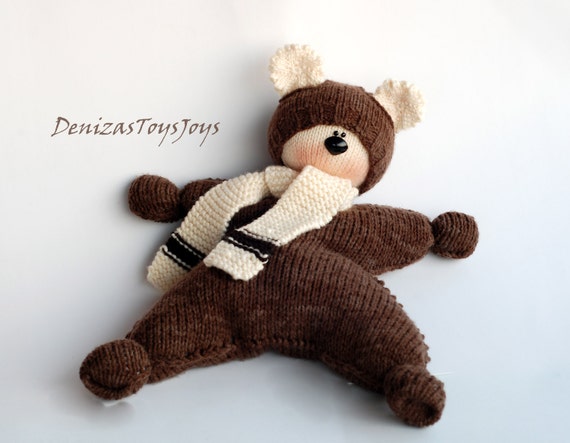 My version is not stuffed as I prefer it to lay flat and it makes it easier to wash as only the head is stuffed with polyester fill.  The body in this pattern is worked on single pointed needles using Double Knitting. First Row: *Knit 1, slip 1 purlwise with yarn in front, repeat from * across the row
Repeat stitch pattern on each row.

Cast off (using any method)

Cast on an even number of stitches with the main color

Repeat stitch pattern on each row until your work is the length desired.
Cast Off (using any method)

Double Knitting on a Long Loom

When you get to the end of the loom, turn your loom and wrap the yarn around each of the pegs you missed.

For the first or cast on row, repeat the previous instructions so that you have two loops on each peg. Wind the tail of the yarn around the side peg and then work your way down one side of the loom knitting the stitch on each peg. Turn the loom and repeat all the way along the other side.

At this point, you should have two loops of yarn around each peg on the loom. Wrap the tail around the side peg to hold it while you are working. Beginning with the last peg you wrapped the yarn around, use your loom hook to lift the bottom loop up and over the top loop to form a knit stitch.

Congratulations! You have just completed your first row. For the next and each following row, starting with the peg opposite the peg where the tail of the yarn is sitting, wind your yarn around each peg zig-zagging from one side of the loom as you did in the establishment row. When you have reached the end of the loom, turn and wrap the yarn around each of the pegs that you missed on the first pass.

When you have gone all the way down one side and back to the starting point, you are ready to knit that row.

At this point, you should have two loops of yarn around each peg on the loom, one is the stitch you knitted in the previous row and the second is the yarn you have just wrapped around the pegs on the loom. Wrap the tail around the side peg to hold it while you are working as you did on the establishment row and beginning with the last peg you wrapped the yarn around, use your loom hook to lift the bottom loop up and over the top loop to form a knit stitch.

Then you just repeat until your knitted fabric is the length desired.